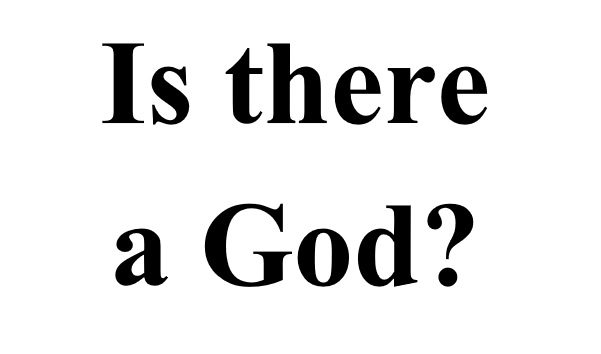 This is a question that is very easy to ask but much harder to answer.

One of the better ways to answer this question is to, instead of answering, ask more stimulating questions back. Intriguing counter-questioning may lead the questioning curious mind to think about the original question even deeper. And it may even possibly lead to enlightenment.

Some of those stimulating questions can be based on purely scientific contents alone. If using science to stimulate one’s curiosity of God is not clever, what else can be?

Consider all the biometric identifications humans have been using to identify an individual. Today even the courts of law are accepting some of these identifications as binding evidence. These biometrics are also used to grant access to controlled areas like secure buildings, or to enter a country at the airport etc. The up and coming AI (artificial intelligent) is full of biometric identities.

Fingerprint, iris scans, DNA (deoxyribonucleic acid), facial scans, palm veins are a few unique qualities that are used to identify an individual. But the list of one’s uniqueness may well go beyond these identities.

One of the most used identifications is fingerprint. Though a partial fingerprint is used to identify a person, the ridges and the valleys in the whole palm is unique for each person. And it is unique over the life of that person. In 1788, scientist Johann Christophe Andreas Mayer said fingerprints “never duplicate in two persons”. In addition to humans, our distance relatives such as gorillas and chimpanzees also have their own fingerprints. Beyond this family tree, koalas also have own fingerprints.

In 1949, British ophthalmologist James Hamilton Doggart identified, like the fingerprint, the iris of a person also contains its very own uniqueness. Later in 1953, ophthalmologist Francis Heed Adler proposed to use iris scan for the purpose of identification, instead of fingerprints.

DNA was first identified by the Swiss physician Friedrich Miescher in 1869. DNA soon became another strong biometric identification of a person. In fact, not just human but all living things have their own unique DNA with a genetic blueprint. In the 1992 murder case of Denise Johnson, the police in the US state of Arizona used DNA from seed pods of a Palo Verde tree to identify and convict Mark Allen Bogan for the murder.

Though facial uniqueness has been with us forever, use of facial recognition-based identification took place only after our computers’ connectivity and their algorithms much improved. Facial features such as the center of the pupils, outer corner of the eyes and their coordination relative to other facial features were unique to each individual.

Those are the few scientifically proven and legally accepted uniqueness of a living thing such as human, animal, tree etc. Science also knows that no two zebras have the same black stripe pattern. No two butterflies have the same colourful spots. Not only are the black spots on cheetahs unique, but also the black rings on their tails. We also know other uniqueness like odour of a person, voice of an animal, etc. exists. There could be even more unique features that human eyes cannot see, or senses feel.

Just for simplification, let’s say each of the living things in the universe (and beyond) has at least 10 unique qualities, and call them a soul’s identification matrix.

Trying to answer the ‘why’ question may even demote Darwin’s theory of evolution in your mind. The ridges and valleys in our fingerprints can be considered as an evolutionary way of adding friction to enhance the grips of the hand. But why should each of these animals have their very own pattern? Evolution may have given the giraffe a long neck so it can get the leaf from the top of the tree. But why do they need unique ports on those necks? The ‘theory of evolution’ should be rewritten as ‘theory of physical evolution’ since it only focuses on the physical side of the living things. When we analyze Galapagos finches, why do we limit to the shape of those birds and not consider their individual uniqueness? Living things are much more of an endless permutation than simple combinations. Living things may be massively produced into families, but individually identified. But why, why, why?

The ‘when’ question would let a scientifically inclined person to think about the Big Bang theory. Even if the Big Bang was true, it wasn’t the beginning of everything since it is hard to believe a massive explosion also carried a magical logic to handle future living things’ uniqueness.

Yet ‘how’ can billions of years of natural processes that cleverly avoid duplication of a soul’s identification matrix? If a mother conceives a bay, that baby will have a unique fingerprint. If the baby was aborted, will that fingerprint be reused somewhere later? We don’t think so. What if that mother planned never to have a child in the first place? Was there a unique fingerprint allocated but never used or will it be given to another baby somewhere? Whatever happened to the biomatrix of dinosaurs? Were they too used once? Were they cleverly designed to be used once?

And ‘where’ in the nature is the mechanism that controls this uniqueness maintained? On earth, or in a black hole somewhere? Or, is it possible that nature has an amazing logic that will maintain the uniqueness of each living thing independent of time and place?

Finally, the ‘who’ question will circle back our curious minds to the mighty unknown.