By admin on June 19, 2021Comments Off on Crocodile Tears of the Hypocritical G4.5 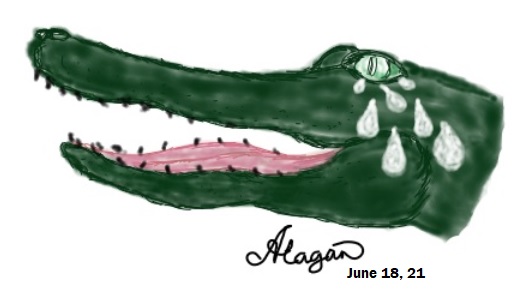 The leaders of the G7 met in Cornwall from June 11th to 13th for their 2021 Summit. At the end of the Summit they released their joint communique. The purpose of the summit and the communique was to identify the pressing issues and present ways to tackle them. But this communique is instead full of crocodile tears from the members of their self-serving Old Boy’s club, and instead was written to fulfill their own self-serving interests.

One of the horrific events the world has seen in past weeks is the violent war between Israel and Hamas from May 6 to May 21. For this war, 256 Palestinians and 13 Israelis died. Hamas launched about 4,360 rockets and Israel conducted about 1,500 strikes. But the G7 communique said nothing about it. Seriously, is it a non-event to the G7? In the 2018 communique, G7 said it “remain concerned about the Israeli-Palestinian conflict”. It looks like the G7 is no longer concerned about this matter.

However, in paragraph 49 of the 2021 communique, the issues surrounding Xinjiang and Hong Kong on the other hand were recognized as pressing issues. The communique was calling on China to respect rights and freedom in those two places. Does G7 believe Palestinians are enjoying a higher degree of rights and freedom than Xinjiang and Hong Kong? And that is why they dropped the issue from the list? Or, is it just another “enemy’s enemy is my friend” kind of thing?

Paragraph 17 of the 2018 communique was asking Russia to cease its “support of the Syrian regime”. But this year the communique spoke nothing about Syria. The Syrian government survived the foreigner-induced regime-changing war. Now the friends of the G7, those who staged an armed conflict to have a regime change, are already starting to reopen their embassies in Syria. Even Saudi Arabia is working on reopening its embassy in Damascus.

In Paragraph 49, the G7 states it is committed to work with the “UN and wider international community” to uphold “the rules-based international system and international law”. It was said only a year after the US imposed sanctions on senior officials in the International Criminal Court, including chief prosecutor Fatou Bensouda. Does the G7 tell the rest of the world “do as we say, not as we do”?

Paragraph 51 was asking Russia to end the “systematic crackdown on independent civil society and media”. How about the other G7 friendly counties? Just weeks ago, Human Rights Watch, Amnesty International and 61 other organizations called on Egypt to “take immediate action to end the Egyptian authorities’ wholesale crackdown on independent organizations and peaceful dissent”. But did the G7 look the other way to serve its own interest?

Paragraph 59 was talking about the “military coup in Myanmar”, but nothing about Rohingya – the other ongoing crisis in Myanmar. But the 2018 communique, in Paragraph 19, recognized the Rohingya issue and asked for “dignified return of the refugees and displaced people”. The Rohingya matter disappeared from the G7’s radar this year. Is it because the Rohingya have returned to their home?

If Trumpism comes back to the White House again in 2024, then the rest of the G7 members would, once again, cry “With friends like that, who needs enemies?”.

Also, how can the G7 still be considered the top seven greatest economies? They were in the 1970s, but not now. As of now China is the second largest economy, and India is the fifth largest. Italy and Canada are no longer in the top seven. And China’s economy is almost 10 times bigger than that of Canada. Realistically the G7 should be seen as G4.5, and should be recognized not as an organization of righteousness and world-serving, but as an organization of hypocrites and self-servers.

Crocodile Tears of the Hypocritical G4.5 added by admin on June 19, 2021
View all posts by admin →