By admin on December 20, 2016Comments Off on I Love Terrorists 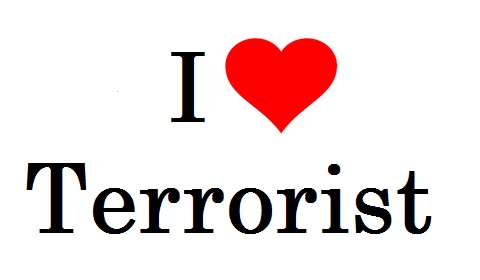 From the individual nations to the United Nations, the message is clear: terrorists are evil! There is no second guessing on that, period. Every human of the world is expected to stand up against terrorists, reject them, and stop them. That is the expected resolve of a civilized world. But here is a dilemma. Can one ask for the ‘binding’ definition of ‘terrorists?’ No, absolutely not! That is the trick of the (terrorism) trade. In this trade unfortunately, the act of terror has been traded for the benefits of foreign policies.

Even the UN will not provide you a binding definition of ‘terrorist”. It is possible the UN is not allowed to do so. Instead of a definition, depending on whom you ask, a LIST of chosen terrorists will be given to identify what is and isn’t a terrorist. And if one goes around the world and collects these lists, even the names on those lists will not match each other.

The latest in the terrorist/rebel saga was staged when Turkish President Recep Tayyip Erdogan, on November 02, 2016, expressed his anger for Germany’s support of FETO (Fetullah Terrorist Organization). Erdogan and his Turkish government sees FETO as a terrorist organization. Even though Germany and the West also designated FETO as a terrorist group, they allowed the group to run bases in the west for the benefits of foreign politics. The armed Kurdish group PKK (Kurdistan Workers’ Party) have also been seen as terrorists by Turkey, yet they are darlings of the West.

“We are concerned that Germany, which for years took the PKK and DHKP-C under its wings, has become the backyard of FETO,” said Turkish president Erdogan. After all, Germany and Turkey are members of NATO, one of the tight-knit military alliances. Still, the undefined term ‘terrorist’ allows them to apply totally opposing interpretations.

This undefined terrorist/rebel term, on the other hand, also allows Turkey to see the militant group Free Syrian Army (FSA) as rebels, while the Syrian government labels FSA as terrorists. So, it is clear that Turkey is also one of the countries using the interpretation of terrorist/rebel to enforce its foreign policies.

Not just Turkey, every nation that has active socio, economic, and political interests beyond their borders have terrorist/rebel in their foreign policy enforcement tool box. Deploying proxy armies is an easy and cheap way to have a fighting force against the enemy without sending the army in harm’s way. A war against another country may require an explanation to the UN. A war against another county through a proxy needs no explanation.

America and most of the western countries also see Free Syrian Army as ‘rebels’. The West supplies heavy arms to these groups, trains them, and provides logistical and intelligence support. For the West, a regime change in Syria deserves a full-scale war because of terrorists/rebels.  But for them on the other hand, Palestine taking arms to get back their lost country doesn’t deserve any militancy. For the West’s socio, political, and economically oriented foreign policy, FSA is a rebel group, while PLO and Hamas are terrorist groups.

Saudi Arabia too is enforcing its foreign policies by the means of rebels/terrorists in the Middle East. The Saudis are one of the primary supporters of Free Syrian Army which, as said earlier, is considered a terrorist organization by Syria. But on the other hand, the Saudis are engaged in a prolonged war against Houthi armed groups in Yemen. Houthi is fighting against the pro-Saudi government in Yemen. The Houthi group is said to have been nurtured by Iran, an adversary of Saudi Arabia. It is a cycle of governments to rebels to terrorists that needs no explanation in the UN.

India also had its fair share of rebel/terrorist-mingled foreign policy. India is lashing Pakistan for harboring terrorists since Pakistani-based armed groups have been attacking India. But ironically, about 30 years ago, India did to Sri Lanka what Pakistan has been doing to India. India took more than 1,000 Sri Lankan Tamils, gave them military training in India by retired Indian military personnel, and sent them back to fight against Sri Lankan forces when Sri Lanka leaned towards America. Sri Lanka called the Indian trained groups ‘terrorists’.

Even Nelson Mandela, who waged a lifelong battle against apartheid in South Africa has been legally identified as a terrorist. He had been on the U.S. terrorism watch list until 2008. He received the Nobel Peace Prize in 1993. He was a terrorist who got the Nobel Peace Prize. If the international community had a binding definition for terrorist, would this have happened? So, one mustn’t be surprised to see some of today’s terrorists eventually being seen as rebels and vise versa in the future. It is all in transnational politics.

Unless the UN and the international community define the terms ‘terrorist’ and ‘rebel’ and identify the militancy per those definitions, we will continue to use them as foreign policy enforcement tools. Until those days come, if they come, we will continue to shed crocodile tears for the victims of terror.

I Love Terrorists added by admin on December 20, 2016
View all posts by admin →