By admin on November 4, 2016Comments Off on America’s Biggest Foreign Policy Miscalculation 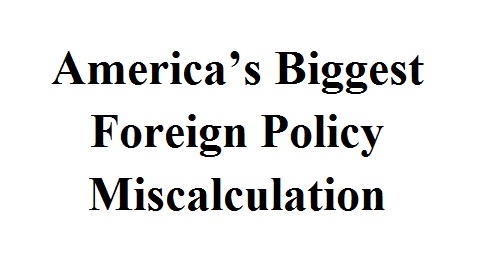 America is ready and willing to move production of its F-16 fighter jet, the Fighting Falcon, to India. And it appears India too is considering it. This move wouldn’t just be a move to low-cost manufacturing. Instead it would be a full-scale transfer-of-technology move. This idea would be unimaginable about 40 years ago, when the very same Falcon fighter jet was introduced to the US Air Force. The life of the F-16 alone can exhibit America’s biggest ever foreign policy miscalculation, and the sharp U-turn America is making to correct it. In fact India’s mortal enemy Pakistan got its first batch of the same F-16s in 1983, about 30 years ago. And even today the Pakistani Air Force operates about 76 Falcons.

The Falcon deal is not the only item in the pipe. The US and India perform regular military drills. On June 9 of 2016, the US, India, and Japan kicked off the annual joint military exercise Malabar 2016. The annual war exercise Malabar was started in 1992, just after the collapse of the USSR. Originally it was between the US and India. Japan joined as a permanent member in 2015.

American Senate on the other hand passed the annual National Defense Authorization Bill for the Fiscal Year 2017. One of the provisions in this Bill called to enhance and promote greater defense trade and military cooperation between the US and India.

In 2009, India bought 8 American-made P-8I anti-submarine aircrafts that could patrol the Indian Ocean and beyond. Again now India plans to buy 4 more P-8Is for $1 billion. These planes can also carry American-made anti-ship missiles.

Other news says that India is persuading America to buy 22 American-made Predator drones, and the Obama administration is expediting the review process.

By looking at all the events, one could say that US-India relations, especially military relations, are the fastest growing love affair in the world of foreign policy these days. But is it based on a long history of trust and friendship between these two nations? Not really. In fact America’s foreign policy is abruptly making a sharp U-turn to correct the biggest ever miscalculation it made a few dozens of years ago. And India is enjoying the tail wind.

During the Cold War, America saw India as enemy number two, just after USSR. Though initially, India wanted to maintain a non-alignment role in the Cold War, American’s foreign policy in South Asia pushed India, the largest democracy in the world, to align with socialist USSR. Policies under Southeast Asian Treaty Organization (SEATO) and Central Treaty Organization (CENTO), fortifying Pakistan’s military, forced India to sign the Indo-Soviet Treaty of Peace with USSR in 1971. If America was honestly committed to promoting democracy and containing communism during the Cold War, it should have befriended India, the largest democracy of the world, instead of sponsoring dictators around India and collaborating with them.

From the time of the Indo-Soviet Peace Treaty, Indian forces became a virtual extension of the USSR forces, not only in terms of foreign policies but also in terms of military equipment like fighters and ships. Even today, large portions of Indian military equipment deployed (from MiG the fighter jet to Chakra the submarine) are from Russia.

On the other hand, America might have had very low expectations of Chinese leaders. That led America to execute its Ping-Pong diplomacy with China. America couldn’t imagine Chinese leaders one day developing China into a superpower nation, and taking away alpha-nation status from America. At that time America was more worried about India than China.

During the Indo-Pakistan war in 1971, it was China the US wanted to ally with. When the prospect of India invading West Pakistan (today’s Pakistan) grew, it was China that American president Nixon encouraged to move its forces to scare India. While pressing India from three sides, America wanted China to press from the north. But China wisely opted out. And that led to the birth of Bangladesh, the land previously part of Pakistan, called East Pakistan.

But within about 30 years, the leadership of China, especially Deng Xiao Ping, proved Chinese leaders were much more capable and willing to contribute to their country than their counterparts in India. Though the Chinese and Indian people were almost comparable in their contribution to their nation, and both lands were resourceful, the democratically elected Indian political figures just wasted more than 30 years, compared to China.

In 1990, the GDP per capita was about US$ 314 in China and US$ 375 in India, more or less comparable to each other. But the Chinese per capita GDP in 2013 had skyrocketed to about US$ 6,800, while it crawled to about US$ 1,500 in India. During this period, the only thing that had been exponentially growing in India was pGDP (Politicians’ Gross Domestic Product).

Evaluating the quality of a political leadership must be based on the pGDP of those politicians and the GDP of the country they rule, regardless of how they came to power.

To further complicate matters, America is trying to be the friend of India and Pakistan now. History suggests that is not going to happen very well in the long term. India, on the other hand, is trying to be the friend of America and Russia. That is also not going to happen well. Additionally the military equipment from the US and Russia in the hands of India will not work well due to compatibility issues.

Will America’s abrupt U-turn bear them fruit? Only time will tell, but the prospects are very dim.