Ukraine War: The Winners and Losers

By admin on June 29, 2022Comments Off on Ukraine War: The Winners and Losers 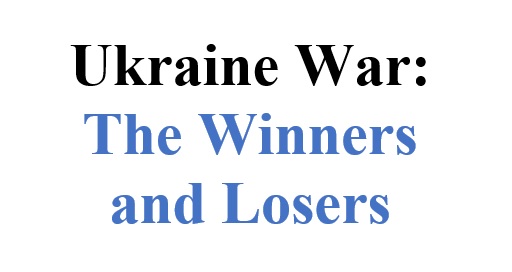 The war in Ukraine has been going on for more than 4 months now. No geopolitical war is ended on time, or on budget. Nothing is special here either. It is just another geopolitical war. Like the other wars, it will end with winners and losers, regardless of how long it takes to end.

As of now, Ukrainian President Volodymyr Zelensky has been seen as a hero. For not running away like the Afghanistan president Ashraf Ghani did, Zelensky is being praised. But in history, Zelensky will not be celebrated, let’s say like the former US President John F. Kennedy.

How JFK handled the Cuban Missile Crisis is the prime reason why people inside America and around the world admire him. JFK had avoided a war that could have been deadly and ugly, nuclear or otherwise. Some hardcore critics in the US and in the West see JFK as a weak person for not fighting back against the USSR. But JFK had ignored those views and preferred to walk away from an unknown war that could have ended worse than Vietnam. JFK saved lives, money, political allies, and who knows, maybe even an ugly defeat. He didn’t even care to display a premature “Mission Accomplished” message.

Zelensky on the other hand, instead of considering his own people and his nation, went to fulfil the interests of the West and dragged his county into a costly proxy war. Some may say Zelensky was defending the pride of Ukraine. Those should look at Japan, a country that unconditionally surrendered to America after Hiroshima and Nagasaki and now is a beloved ally of America.

There is a long list of governments and groups that went to wars only because some foreign government or entity commandeered them. The Free Syrian Army (FSA) is a good recent example of this kind. Some in the West wanted a regime change in Syria and thus created, funded, and guided the FSA. Like Zelensky receiving arms now, FSA also received ship loads of arms from the West. The Free Syrian Army were seen as heroes, but just for a short time.

After lots of people perished and property lost, and some migrated to the West, the regime changing ‘project’ Syria was abandoned by the Western makers. The makers of this war now even started to reopen their embassies in Syria under the regime they wanted to remove. The Free Syrian Army is no longer celebrated.

Volodymyr Zelensky could be the next Free Syrian Army.

In another fresh example, Sweden and Finland just put Kurdish militants under the bus just to satisfy Turkey so they can join NATO. This matter also nicely fit into the proxy war going on in Ukraine.

The war in Ukraine has two possible directions to go; 1) Ukraine alone may fight for a while and then the ‘makers’ of the war will ask them to surrender with a deal that would be painful to Ukraine, or 2) this war escalates to become World War III. The possibility of Ukraine defeating Russia is almost zero. And this war turning into WWIII is very slim. So far America clearly said its boots will not be on the ground. So don’t count on the reset of NATO. There is also a chance it will become Cold War II. The West’s relationship with China can also merge with it and become a new Cold War with multiple adversaries. In fact, this may have already started.

The biggest loser of this outcome would be Ukraine and its people. They lost lives, their economy and their land. A NATO membership was not worth all of the losses. The lost people and some of the land and wealth may never be regained.

Though Russia didn’t have a lot to lose, the next big loser would be Russia. Russia is already running out of people due to their low birth rate. This war further will eat more of its young generation. A prolonged war in Ukraine would be a reminder of the war Russia had in Afghanistan. But on the other hand, Russia has a reason to fight back; NATO has been encircling it.

Some European countries are the next big losers, especially Germany. Not long ago, someone in Germany said, “with friends like Trump, who needs enemies”. But now Germany is forced to adopt American foreign policy over its own foreign policy. Abandoning Russian oil and gas is not an easy thing to do for Germany. But it has been forced to do so. Soon it may even import energy from the US. For some in the US, that is one of the final goals of the war.

Those who relied on Ukrainian wheat, oil and other goods are also losers in this war. After Ukrainian ports were blocked, the food prices in these countries skyrocketed. These poor nations will continue to pay premium prices for their food. These countries had been suffering from the COVID pandemic already. The war in Ukraine just added salt to the wound.

For now, India is seen as one of the winners. It is getting the cheapest oil from Russia after the West’s embargo on Russian oil. But this gain may have a negative effect on India later. Most in the West question the trustworthiness of India, especially in military and economic alliance. During the last Cold War, India tried to exercise a non-Alliance policy and failed. It did not want to join Russia or America, but America forced it to join Russia. This time India tries to be a member on both sides, a risky move. Only a World War will confirm where their allegiances lie.

America is also a winner in this war, even though it has given away lots of money and arms. It is a worthwhile investment since the war is weakening the enemy a bit, and soon may be getting new customers for American oil and gas. And it has not put its boots on the ground to worry about casualties.

American Defense Secretary Lloyd Austin once said they wanted to see the war in Ukraine to weaken Russia, and that Putin cannot repeat what he has done in Ukraine. That is far stretched wishful thinking. America forgot all about the Vietnam War and went into Iraq with lies. Russia/USSR forgot all about its Afghanistan invasion and went into Kiev, Ukraine. Sorry, but the human animal never learns to be wise from its past mistakes.

Only in space has American-Russian partnership survived through all the confrontations. Now that is also going to disappear. Russia joining China in space endeavors may not be palatable to America, but it has no other choice.

One of the ultimate winners would be China because it wins on several fronts. It is also getting the cheapest oil from Russia. It started to sell more goods to Russia. They even started to sell parts to Airbus planes Russian airlines have. China’s currency got a boost after the Russian ruble was blocked. Unlike India, China is clearly with Russia.

If the Ukraine war drags on, even China’s Cross-Border Interbank Payment System (CIPS) and Chinese currency Yuan may get more of a boost since Russia was kicked out of SWIFT payment system.

Ukraine War: The Winners and Losers added by admin on June 29, 2022
View all posts by admin →